My need for more tooling is outpacing my lack of time. I need to put a large tooling order together and am waiting on Glacern to have a 4th of July sale so I can save some money. In the mean time Brian L from the CNCzone forums made a suggestion. Plunge milling the main bore. This is where you pre-drill a hole then plunge an endmill straight down to bring its location and dimension on target. Simply drilling is not enough because the way a drill works it cannot guarantee positional accuracy or dimensional accuracy. The drill can wander in a cut and sort of go off and do its own thing affecting both size and location. As if that wasn’t bad enough a drill cannot even guarantee a round hole. So why do we even use them? Well it is still the most efficient way to remove material out of a bore as long as you understand its limitations.

Typically a hole is drilled then reamed for better accuracy. This produces an accurately sized hole that is perfectly round but since a reamer simply follows the contour of the previous hole it is just really along for ride of whatever windy path the drill happened to take. As a result the positional accuracy of the hole suffers and cannot be certain.

I experimented with boring as it solves all of those problem however with the tooling that I have it is not time efficient at all. Circular interpolation has been the way I have been doing it for a while but this has been hard on my endmills and the finish, while good, is not great for the amount of time it takes.

I started out by drilling two holes in a piece of scrap, just as I would on the gasblock. The first one I roughed out with circular interpolation first, measured, did a spring pass, measured again, then reamed it. I measured the bores a couple of times before I reamed because in the last video there was evidence of some significant deflection where the milled bore was eccentric and too small. This confirms it. I had programmed the roughing endmill to open up the hole to 0.742 and it had only gone to 0.7345 on the first pass, and then 0.738 on the second pass. Even though I was technically not cutting the bore any larger it was still removing material on the spring passes. I wanted to leave about 0.004 per side in the bore for the reamer to clean up but I ended up leaving about 0.006. Probably not a big deal. The reamer sounded great, left a pretty good finish, and most importantly was on target for size and roundness. 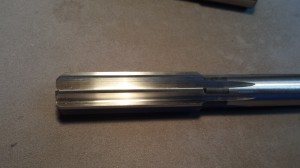 I know why they call it a chucking reamer; because you have to chuck it in a vice and saw a few inches off the shank before you can use it [rimshot]. Not a joke I really had to do that because it was simply too long to fit in my mill with the vice. I used a cutoff wheel in an angle grinder.

Next I tried the 2fl HSS endmill donated by Brian to simply plunge the remainder of the bore away after drilling the initial hole. This work pretty well but seem perhaps too aggressive as there are some chatter marks on the side walls of the bore. In addition to this the chip that was generated was quite thick and stiff and it promptly wrapped itself around the tool and collet chuck pretty happily. 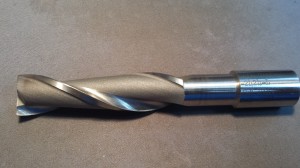 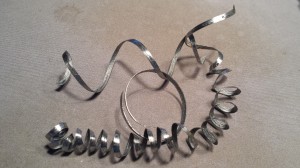 My guess is that chip is too thick and not breaking up. It seems there is a sweet spot where the chip is just the right thickness to break. Too thin and it makes a very flexible spring, too thick and it makes a stiff wire. I was excited about trying this because it could potentially eliminate the circular interpolation roughing and the reaming in one step. 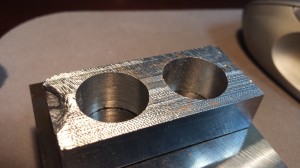 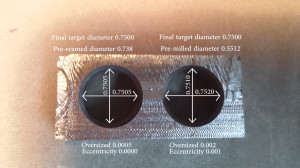 The reamed hole had a better finish, better dimensional accuracy, and better roundness than the plunge milled hole. Perhaps being less aggressive or pecking with the plunge milling would make a better hole. Nevertheless it still could be a valuable technique if I can find a “pre-ream” 3/4″ endmill, or one that is slightly undersized by about 0.010 so I could then go back and ream it. That will not eliminate any extra operations but it may simplify one by eliminating the endmill roughing. On that note the roughing of the bore still sounds chattery unless I really dial back the depth of cut. Hmm…what to do.

I tried plunge cutting from the side to see if it could quickly remove the internal radii on the gasblock and potentially eliminate those spiral roughing tool paths. The answer seems to be a resounding no. The tool generated so much force it overcame the ability of the Y axis motor to hold its position and literally pushed the whole table aside. That is an 850oz/in. motor. I guess a comparably sized servo would have served no better. Maybe a much larger stepper like a 1200oz/in. would have fared well. Anyway sad to say that this broke the tool, and it actually chipped like carbide. The good news that I overlooked is not even that could stall the spindle motor at only 350RPM.

Next I drilled and milled a gasblock blank and this time didn’t relieve the top surface with the 3/8″ rougher since it would result in a redundant tool change in production. The problem was that the endmill has 2in. flutes and I need to cut around 2.375 deep. What I did instead was relieve the opening of the bore a little larger than normal so the un-fluted shank wouldn’t rub and cause chatter and deflection. This worked ok but the roughing still sounded bad overall. I then reamed a gasblock blank to depth and it turned out amazingly accurate. Dead on in fact. The only thing I would like to improve is the surface finish which is not what I would call exceptional by any stretch. It still has that fine pitch screw texture. I wonder if stoning the sharp corners of that 45 deg chamfer at the end to make them more round would help? Any ideas? 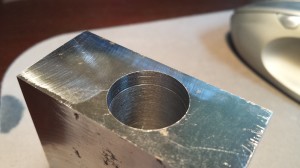 We’re getting there, just need more tools and more time. Thanks again for the endmill Brian! Sorry I broke it! Thanks for reading and keep coming back for more!