In this episode I simultaneously take a step back and a step forward. After destroying my last 0.5 roughing endmill I got some help from Carl at Lakeshorecarbide. I received a few of his 0.5 roughing endmills and was immediately impressed. He had also suggested some cutting parameters to use with these that has worked well in his experience. Much of this video is going back and making some test cuts to determine more optimum parameters to both extend tool life as well as maximize material removal rate with some finishing and boring experimentation in there as well.

Here is the Lakeshorecarbide endmill vs the broken Maritool. The most obvious difference is the helix pitch followed perhaps by the amount of relief on the trailing edge of the flutes. I think the higher pitch angle of the lakeshorecarbide helix lends itself less conducive to chatter and the greater relief of the Maritool may make it more easily chipped or broken due to being less rigid. I don’t know for sure but I have gone through several of those while taking less aggressive cuts than the ones I took in the video. 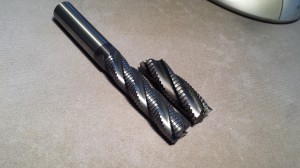 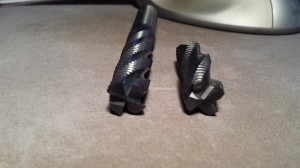 The cuts recommended by Carl worked out very well, extremely well actually because had it not been for him suggesting I try them I don’t think I ever would have. If you recall from the Hackaday article I had a very anemic 3HP BLDC spindle motor that would have stalled and snapped this endmill in a heartbeat in those cuts and I’m instinctively apprehensive about taking an aggressive cut now. However the new AC/VFD motor I replaced the BLDC with is erasing those instincts as it doesn’t really even notice the cuts. The limiting issue now is more pertaining to tool, work piece, and machine rigidity. One day I would like to have a Haas, Makino, or Mori Seiki, heck I would like to have a fleet of them, but I have to work with what I have now. The new roughing parameters have shaved just over 2hrs. off my potential cycle time for the entire 8 stations fixture making it just over an hour instead of roughly three and half hours. That’s not even the best part, the endmill still looks as new as when I got it! No chips anywhere.

The boring did not go that well and it still gives me the same problems I had when I first tried dialing it in a couple of years ago. As you can see below the interpolated hole looks much better albeit probably not quite as round. Does it matter? I don’t know yet. I might go ahead and order a reamer and try that out. One problem I can see is the bore is supposed to be 0.750″ but if I make it that with a reamer it may get bigger after the parkerizing finish procedure is done. I know this because the one I had made fit perfectly on the barrel, nice and snug, but after parkerizing it fit a little loose so I have been aiming to get a slightly undersized hole. Hmmm 0.7490″ or 0.7495″ reamers are twice the price of a 0.750″ so I’ve been holding off on that until I know exactly what size bore I need to machine.

Here is a comparison of the best finished bore using the Criterion boring head and C6 carbide boring bar (top) vs interpolating the bole with an endmill. 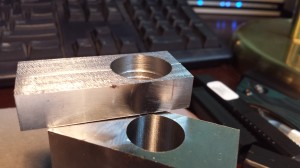 Perhaps the most consistently disappointing operations for me is the finishing with the 0.5 finishing endmill. I always seem to be battling chatter resulting in a wavy or rippley finish. Even when I don’t hear any overt chatter the tool marks are quite evident. 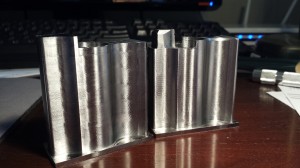 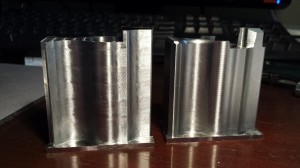 I would love to be able to do a single finish pass at full depth and have a nice finish but I’m not sure that is going to be possible with such a deep cut using such a long endmill without getting chatter. I tried it once before and it left a bad finish. I also tried taking a spring cut with no width at all and it seems to have made the finish worse. I’m still toying with the idea of trying a variable flute endmill of the same size to see if that helps, in my experience variable flute endmills work great. A couple of years ago I was battling a huge amount of chatter when trying to slot some 4140 HT with a 0.375″ 4fl endmill, so I switched to a rougher of the same size. The chatter was better but was still there and still bad. At that point I bought both a 3 flute endmill and a variable flute of the same size to try with the slotting. I tried the variable flute first and the chatter had vanished.

Well that’s it for this week. Feel free to make suggestions below on ways to improve my surface finish operations. Until next time.